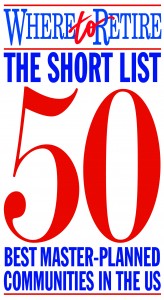 Ocean Ridge Plantation is named for the 7th time by Where to Retire magazine as one of the top places to retire in America. Ocean Ridge has been recognized as one of the top 100 Best Communities since the magazine launched its biennial list in 1999. This year’s inclusion in the magazine’s “Short List: 50 Best Master-Planned Communities in the United States” in the upcoming July/August 2011 issue (on newsstands June 21) marks the 7th time the magazine has compiled the honor roll of America’s best master-planned communities, naming Ocean Ridge Plantation each time.

The editorial group from the magazine researched communities in every state and narrowed their search to the final 50 in 17 states.  The magazine considered both active-adult and all age group communities in a variety of natural settings in popular retirement destinations, including near the ocean and in the mountains.

Where to Retire described the lure of the coastal community of Ocean Ridge Plantation being its ability to eventually boast 90 championship holes of Big CatsTM golf, with four distinctive courses in place and a fifth on the way.  Touting its three clubhouses, three restaurants and its location in the southeastern most part of Coastal North Carolina, the article recognizes Ocean Ridge’s appeal to a variety of interests in both North and South Carolina.  According to the article, Ocean Ridge’s “Plantation Club, overlooking a four-acre lake, has soft-surface tennis courts, heated pools and a fitness center, and its Beach Club is about five minutes away, providing convenient amenities on noted Sunset Beach.  Miles of walking and biking trails wind around the neighborhoods and nature preserves in woodlands, and a community garden flourishes with a variety of vegetables and colorful flowers.” In addition to the amenities, homes, golf, beautiful landscaping and community, the article captures what residents seem to appreciate just as much – their neighbors.  The single-family homes in Ocean Ridge range from the low $300,000s to $1 million and up.  Of the 1,800+ homes planned on 3,000 acres, about 500 homes are built.

“What an honor to once again be selected for such a prestigious award byWhere to Retire magazine.  Although there is no age restriction for living in Ocean Ridge, many are continuing to discover just what a special place Ocean Ridge is to retire, especially for active retirees,” commented Mark A. Saunders, CEO of The Coastal Companies, the parent company for Ocean Ridge.  “The lifestyle activities and enjoyment are unlimited.”

All of our coastal communities are conveniently located between Myrtle Beach, SC and historic Wilmington, NC in beautiful Brunswick County, NC. Nearby each community is a pristine island and the only beaches on the entire east coast that are south facing which allows for breathtaking panoramic views of beautiful sunrises and sunsets over the same horizon.

Our communities have annually been honored with placement and praise in nationally recognized publications. Here are three examples:

When you call or send us an email ask about our 3 days & 2 nights visitation packages. We'll help get you here at a discount so you can spend time in our communities and in coastal Carolina.